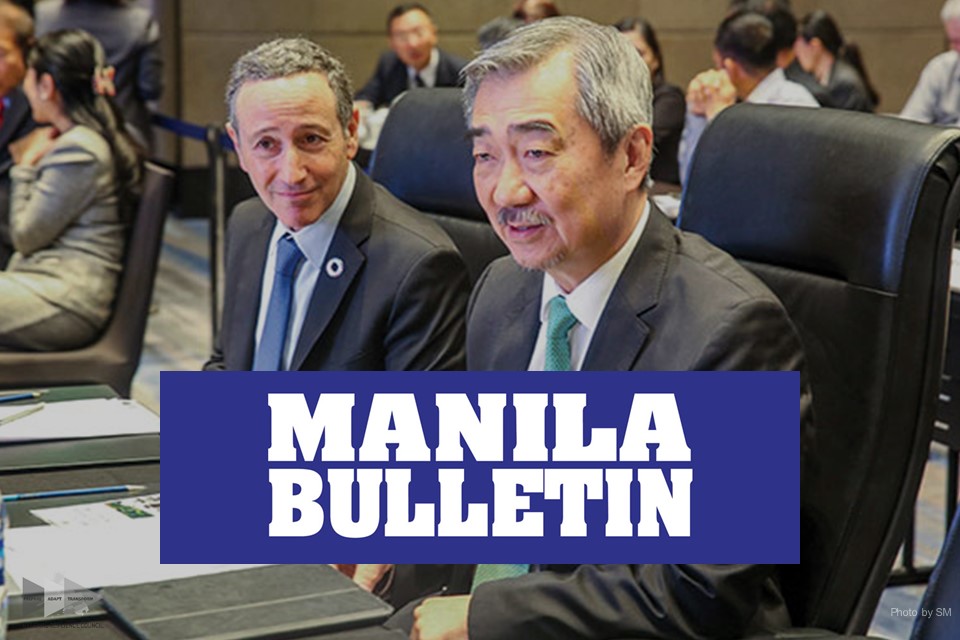 Leading the move for disaster resilient PH – For the first time, the government, private sector, and civil society come together to tackle and address disaster resiliency and climate change to form the National Resilience Council. The announcement was made at the Top Leaders’ Forum at the Conrad Hotel in Pasay City. The TLF is a gathering of the country’s big businesses to tackle disaster management. It is led by United Nations International Strategy for Disaster Reduction (UNISDR) head Dr. Robert Glasser (4th from right), and SMPHI Executive Committee Chairman Hans T. Sy (photo center).

Hans Sy, Chairman of the Executive Committee of SM Prime Holdings, Inc. (SMPHI), continues to lead private sector initiatives in the Philippines on disaster resiliency with his re-election as a member of the board of the United Nations International Strategy for Disaster Reduction (UNISDR) ARISE International Board, the top global business leaders’ group on disaster risk reduction management (DRRM).

Sy’s re-election was made during the annual general meeting of ARISE and was formally announced at the 2017 Top Leaders’ Forum, a private sector conference that make businesses more resilient against disasters.

He is the only Filipino member of the ARISE International Board, along with top global business leaders. He was first elected to the board in 2015 when ARISE was formed to be a platform for business leaders to share information, experiences, activities and projects on DRRM.

Sy has been at the forefront of private sector-led DRRM initiatives in the Philippines because of the vulnerability of the country to natural disasters. Between 1995-2015, the Philippines has been ranked 4th among countries with the highest human cost from weather and climate-related disasters by the Center for Research and Epidemiology of the UNISDR.

In 2016, the Philippines has been ranked 3rd in terms of risk and vulnerability due to its inadequate infrastructure primarily due to weaknesses in urban planning development.

This is the reason why Sy has spearheaded the Build Back Better principle in all aspects of infrastructure development in order to address the ever-growing threat of climate change, calamities and other emergencies.

“An efficient and resilient critical infrastructure is imperative for the overall well-being of a nation, its citizens, its economy,” Sy earlier pointed during an UNISDR forum in Cancun, Mexico.

This is the reason why SM Prime invests 10 percent of its capital expenditure on DRR in the construction of its buildings.

“By investing in resilience we minimize vulnerability, better safeguard physical assets, reduce recovery expense, and contribute to local government efforts. Ultimately we are able to better protect lives, and have safer, healthier, happier communities” he added.

Through its many programs, ARISE seeks a substantial reduction of disaster risk and losses in lives, livelihood and health. It has 7 key themes which include DRRM Strategies, Insurance, Investment Metrics, Education and Training, Legal and Regulatory and Urban Risk and Resilience.

Since its inception, ARISE, which has more 140 member companies from around the world and from every sector of the economy, has made headway in setting standards to make businesses more disaster resilient and establishing stronger partnerships with governments to implement DRRM projects.