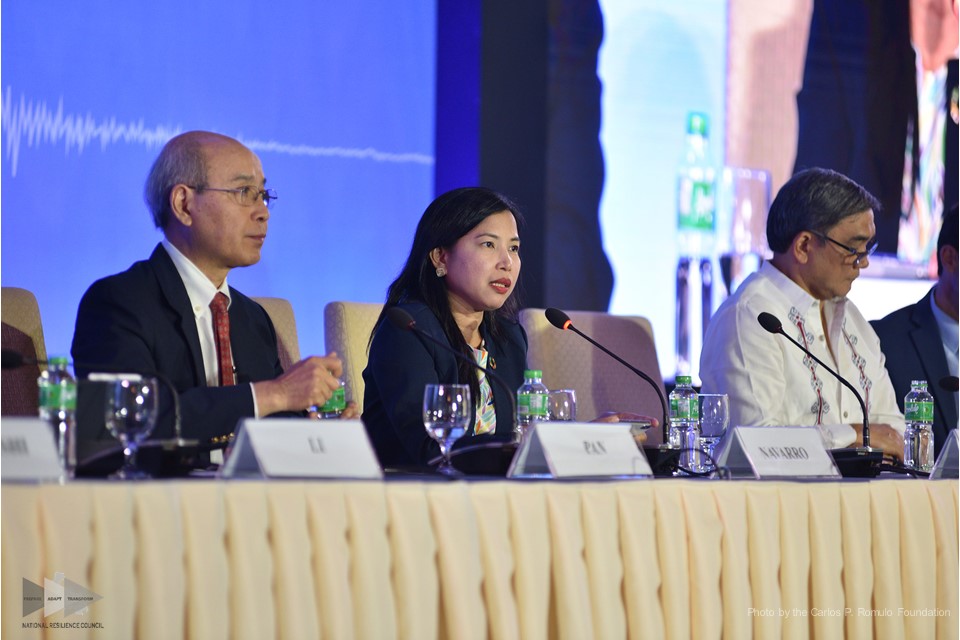 Ambassador Roberto Romulo, Carlos P Romulo Foundation (CPRF) Chair and National Resilience Council (NRC) Convenor, delivered the welcoming remarks at the Megacities at Risk Conference. He stressed that the occurrence of a 6.1 earthquake which rocked Metro Manila and Pampanga provided the urgent food for thought on how the Filipinos should plan and prepare for the Big One.

NRC Co-Chair and SM Prime Executive Committee Chairman, Mr. Hans Sy, also saw the importance of the conference in starting a critical conversation among decision makers and stakeholders involved in disaster risk reduction (DRR) and resilience building. “It was driven by the main concern for the survival of the estimated 25 million people in the socio-economic and political centers in Greater or Mega Manila, and the importance of sharing knowledge and learning from the expertise and experience of our neighbors.”

With the theme “Engineering Resilience to Seismic Hazards”, the conference focused on the seismic risk in megacities and how resilience is a goal that needs a whole-of-society effort. It highlighted the private sector’s role in achieving resilience through risk-sensitive investments and allowed participants to assess the country’s progress in addressing the priorities of the Sendai Framework for Disaster Risk Reduction, as well as other agreements to coincide with Philippines’ commitments for the Sustainable Development Goals. It aimed to contribute to the work done by the UN Office for Disaster Risk Reduction (UNDRR) through the Global Science and Technology Advisory Group, the Private Sector Alliance for Resilient Societies (ARISE) and other multilateral and bilateral partnerships.

The conference featured three plenary sessions—Identifying, Understanding and Reducing Risk—with corresponding workshops. Each plenary session consisted of leading local and international disaster experts and policy makers—specifically hailing from the Philippines, Japan, United States, Chinese Taipei, Indonesia and Singapore—who shared their experiences and DRR technologies. These sessions explored the context, complexity and dynamics of hazards and risk while also tackling the capacities needed to identify exposure and vulnerability. The sessions also provided an avenue to consider organizational behaviors, cultures and local knowledge and attitudes of stakeholders and leaders towards risk. After every session, the participants were welcome to ask experts for further insights during the question and answer (Q&A) portion.

For Identifying Risk, experts explained how to create seismic risk profiles at city level and introduced Early Warning Systems (EWS) as effective and efficient measures to communicate risk through various channels, as applied in countries like Japan, Chinese Taipei and select areas in the United States. Speakers for this session tackled the following topics:

Session 2 emphasized the importance of conducting earthquake scenario analysis to understand risk levels of lifeline systems (such as communications, water, power), therefore helping in the detection of highly vulnerable infrastructure and communities and determining coping capacities in the event of aftermaths. Speakers for Understanding Risk tackled the following topics:

Putting It All Together

In the last session, participants broke out into four different workshops: Identifying Risk, Understanding Risk, Reducing Risk and Multi-Stakeholder Framework on Joint Collaboration.   They reflected on the respective results of the plenary discussions and worked together to identify gaps, priorities for action, desired outcomes, possible partnerships and timeline. The simultaneous workshops also allowed participants to explore mutual assistance mechanisms for joint collaboration on research and public-private partnerships. Each workshop had experts who served as facilitators, a resource person from Phivolcs and documenters from NRC and the Ateneo de Manila University Master in Disaster Risk and Resilience (ADMU-MDRR) program.

In his closing remarks, Amb. Roberto Romulo reminded the participants that addressing DRR and resilience is not a one-off affair. He said that the true challenge lies in developing an understanding that everyone must work together to make a change.