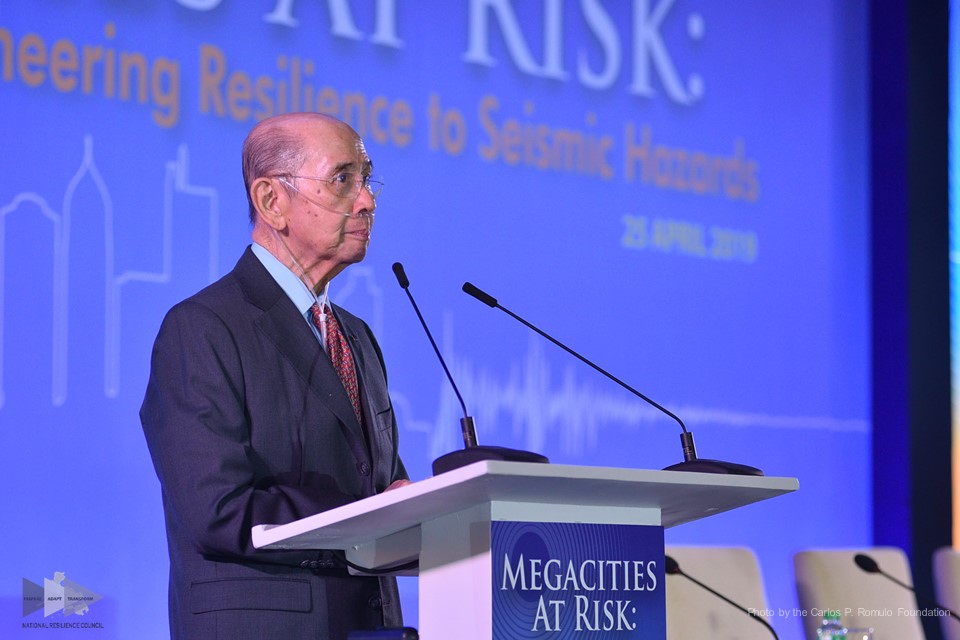 The recent conference on “Megacities at risk: Engineering resilience to seismic hazards” by sheer coincidence took place a few days after the magnitude 6.1 earthquake that shook Central Luzon, followed by a 6.2 magnitude earthquake with the epicenter this time in Samar. No doubt this made more topical and urgent the importance of earthquake engineering and land use to minimize the casualties.

Majority of the casualties from the temblor that hit Central Luzon were the result of the collapse of a four-story building and a few private dwellings. As in earthquakes around the world, most casualties and property damage were not from the original movement of the ground – collapsing buildings were the primary killer. This is a combination of three deadly factors – poor structural design, bad construction, and location in vulnerable areas. Porac is located on soil that is prone to liquefaction which amplifies the shaking from the original quake.

While no structure can be entirely immune to damage from earthquakes, the goal of earthquake-resistant construction is to prevent the collapse of the building while minimizing the loss of functionality even though there may be some damage. Earthquakes have affected millions of lives in the last 100 years, and despite the improvements in technology and enactment of earthquake building codes, more continue to be killed by earthquakes than by climate related hazards. The failures seem to lie in the intersection between the cost of proper design and structural engineering, risk awareness, and lax enforcement.

In the Philippines, the Building Code specifies the construction method, appropriate size and spacing of beams, posts, and steel rods so that a structure can withstand up to Intensity 8 shaking, said Philippine Institute of Civil Engineers (PICE) director Frederick Sison. According to Phivolcs executive director and DOST Undersecretary Renato Solidum, “with Intensity 6, we do not expect significant damage on a building. If it followed the Building Code, it should not have collapsed. Only cracks, minor damage are expected.”

And there lies the crux of the matter, the implementation and enforcement of regulations concerning construction and land use. Most high rise development benefit from structural engineering with earthquake and typhoons in mind. Many existing buildings, however, need to be retrofitted. The problem is exacerbated outside the Metro Manila area where even though there is a preponderance of low rise buildings, these and residential buildings, are built in violation of the original approved building permit and without the application of proper structural design.

The conference reached important conclusions which support this reality where science, policy, and practice do not work in conjunction, particularly in the Philippine context.

It became apparent during the discussion that there were many national and local authorities involved, sometimes at cross purposes. It was proposed that the National Resilience Council (NRC) may act as the facilitator in linking science, policy formulation, and implementation and practice. It was recommended that the immediate next step is to convene the academic institutions, professional associations, CSOs, and the private sector as a resource pool and plot the roadmap for multi-stakeholder partnerships for community resilience.

This might do for now, but my personal view is that it urgently requires a Cabinet level authority. Ideally, this should reside in a Department of Disaster Resilience. It has almost been two years since President Duterte’s enjoined “both houses of Congress to expeditiously craft a law establishing a new authority or department that is responsive to the prevailing 21st century conditions, and empowered to best deliver an enhanced disaster resiliency and quick disaster response” during his State of the Nation Address on July 24, 2017. Both the Senate and the House have filed various bills answering the President’s clamor, but so far none has been enacted into law.

It was heartening to see the level of importance that the national government and LGUs attached to good earthquake resilience by their participation in the conference. Fifteen national government agencies participated, as did 12 LGUs. The LGUs are the vanguard of earthquake preparedness and resilience. Residents of those areas covered by the LGU participants should find comfort that their public officials are on the ball. These include: Cagayan de Oro City, Naga City, Zamboanga City, Iriga City, Iloilo City (who are all NRC partners) as well as other LGUs – Rizal Province, Quezon City, Mandaluyong City, Bulacan, Muntinlupa, Marikina City, and Taguig City. The private sector was also well represented by major developers including Araneta Group, Ayala Land, Vista Land, Meralco and Robinsons Land Corp. Representatives from CSOs, university faculty and students as well as structural engineers, urban planners and architects were in attendance. We expected 150 participants, but the final count was 200.

The conference and workshops were organized by the Carlos P. Romulo Foundation and the NRC, which is co-chaired by Mr. Hans Sy and DND Secretary Delfin Lorenzana. It was held with the cooperation of Phivolcs, MMDA, the National Research Institute for Earth Science and Disaster Resilience of Japan and the National Science and Technology Center for Disaster Reduction of Chinese Taipei. Experts from Japan, the US, Chinese Taipei, Indonesia and Singapore, as well as from ADB, shared their knowledge with the participants.

A more detailed presentation of the conference and workshop outcomes will be published shortly.